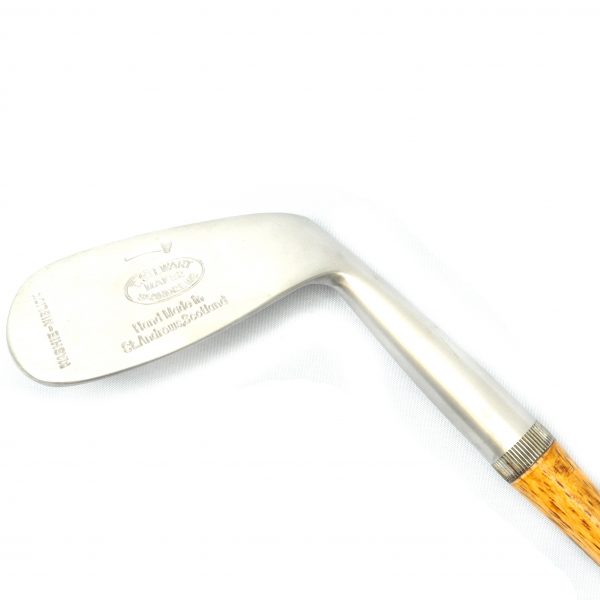 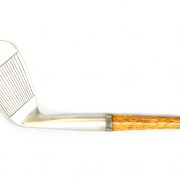 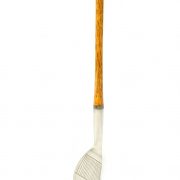 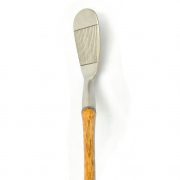 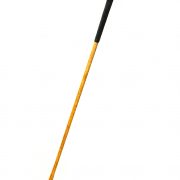 This club has a Scored Line face pattern with the mark of Tom Stewart Maker St.Andrews in the oval, Stamped MASHIE-NIBLiCK and Hand Made in St.Andrews, Scotland.
Please note this club is a Replica.
St. Andrews Golf Co. Ltd dates back to 1881. They are the last remaining Scottish golf club manufacturer, a result of the major consolidation that has gone on in the industry in Scotland. The company is home to three of Scotland’s most famous club making brands: George Nicoll, Tom Stewart, and of course, St Andrews Golf Co. George Nicoll was renowned the world over for his club making skills.
His clubs could be found anywhere that golf was played. In 1920 he embarked on his most adventurous new series when he launched his hickory putter collection. The collection was made up of 6 different blade style putters. We also know George Nicoll began forging irons in 1881 and the firm continued under family supervision until 1982. His son, Robert (1884-1946). ran the firm in later years. The “Hand” (stamp) was their earliest mark. Prior to using the “Hand” mark, the irons were stamped “G. Nicoll, Leven”.

Research tells us that the mark of Tom Stewart was used between 1893-1905. Tom Stewart Jr. opened his cleekworks in Argyle Street St Andrews in 1893. He learned his trade as a blacksmith with his father in Carnoustie, where “cleeks” were sometimes made. (George Morris, older brother of Tom was a client of renown.)

Tom Stewart of St Andrews, Jr (1861-1931) learned clubmaking from his father and also from Robert White. Their firm is one of the better known of the early clubmakers and their output of clubs over the years reached into the millions. His earliest mark was the “pipe” to which was added in 1905, the phrase “T.S.St. A. REG. TRADEMARK.” Stewart also used the “serpent” mark to designate ladies or juvenile clubs between 1895 and 1905. This Club is in good playable condition with a new Grip and Wax coated thread use for the whipping then finished with shellac to protect it from any bag damage that may occur.