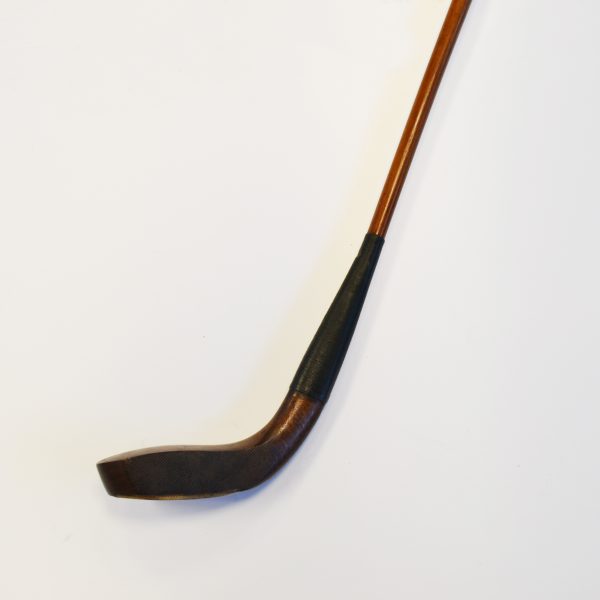 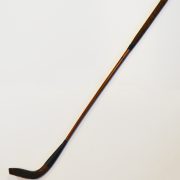 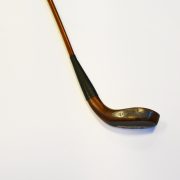 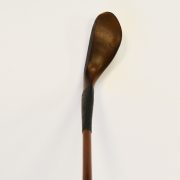 This club is a Scare Neck beech wood Long-nose putter c.1885 finished in a rosewood stain, a heavy rear lead back weight firmly in position and a Ram Horn insert to the leading edge held in position with 3 wooden pegs, on the back of the shaft and across the crown is stamped T. MORRIS St Andrews in a fine oval below the grip. A superb long-nose putter by Tom Morris who is recognized as the first icon from the history of golf and is often referred to as the ‘Grand Old Man of Golf’.

This beautiful putter made from apple wood which was sometimes used around the mid 1800’s, the original shaft has a slight outward bend often referred to as the ‘St. Andrews bow’. The bend is original helping to move the players hands forward when standing over the ball, or the shaft may have bowed with age adding great character to the club. The slightly hooked face also places this club to having been made c.1870.

The golden apple wood head, deep face also helps to date the club. Another characteristic of a club made around this time are the large wooden plugs holding the rams horn insert in place.
The original hide grip with thickened underlisting is another great feature.

Tom Morris.
Tom Morris, born 1821, the first icon of golf was not only an Open Champion winning four out of the first eight tournaments held, he was also a revered club maker, a Club professional at Prestwick in 1851 and later at St Andrews where he was also the green keeper with the 18th fairway later being named in his honour. We can also thank ‘Old Tom’ for designing many of the famous links courses spread throughout England and Scotland and he was named as the first honorary professional to the Royal & Ancient Golf Club.

He was also a golf ball maker serving his apprenticeship under the watchful eye of Allan Robertson who was also one of the first players to gain superstar status and they often played together as a doubles partnership. However after having a disagreement in 1851 over the introduction of the Gutty ball, Tom moved to Prestwick where he became the professional and it was during this time that he started to produce his first golf clubs. Upon returning to St Andrews around 1864 he started to take up club making more seriously and by 1870 he had opened his now famous shop situated alongside the 18th fairway of the Old Course employing three or more workers. The premises had previously been used by Robert Forgan before he moved his business nearer to the 18th green.

Tom Morris was a stalwart of the old style wooden clubs and continued to produce scare head clubs even after the introduction of the Socket head although eventually he offered both styles in order to please the modern players. He also kept producing the long nose style wooden putters in the 20th century in order to keep this style alive and nowadays collectors scramble to buy these clubs. After his death at the ripe old age of 87 in 1908 the firm continued in business and introduced the ‘Autograph’ range of woods and irons bearing his name, plus the irons have a cleek mark showing the face of Tom Morris.

One of his friends was young Tom Stewart the cleekmaker who Morris helped by both selling and using his iron heads bearing the now famous pipe cleekmark. Research tells us that Thomas Mitchell Morris (16 June 1821 – 24 May 1908), otherwise known as Old Tom Morris, was a Scottish golfer. He was born in St Andrews, Fife, the “home of golf” and location of the St Andrews Links, and died there as well. Young Tom Morris (died 1875), also a golfer, was his son.

Morris was the son of a weaver, and began golf by age ten, by knocking wine-bottle corks pierced with nails (to serve as balls) around the streets of the town using a homemade club, in informal matches against other youths; this was known as ‘sillybodkins’. He started caddying and playing golf from a young age, and formally was hired as an apprentice at age 14 to Allan Robertson, generally regarded as the world’s first professional golfer; Robertson ran the St Andrews Links and an equipment-making business. Morris served four years as apprentice and a further five years as journeyman under Robertson, by most accounts the world’s top player from about 1843 until his death in 1859.

From the early 1840s, Robertson often chose Morris as his partner in challenge matches, played by alternate shot format, which were the principal form of competition at that time. It was said the two never lost a team match played on even terms. The team became known as “The Invincibles”. By the time Morris was in his early 20s he was the second-best player in St. Andrews, close to Robertson in golf skill, and won an informal match from him over the Old Course in 1843, but the two players rarely played seriously head-to-head. As Robertson’s employee, Morris was in somewhat of an awkward position.

Morris worked under Robertson at St Andrews until 1851, when he was fired on the spot after being caught by Robertson playing the new guttie golf ball; Robertson had a profitable business making the featherie ball, which was threatened by the emergence of the guttie. Morris was then hired by Prestwick Golf Club, which was just starting up. At Prestwick, he designed, laid out, and maintained the course, ran his own golf equipment business selling gutties and clubs, gave instruction to players, and ran events. He was influential in beginning The Open Championship in 1860, and struck the very first shot in that event.

Morris returned to St Andrews as greenskeeper and professional in 1865, at a then-generous salary of ₤50 per year. He was sought out by the Royal and Ancient, which formally passed a motion in 1864 calling for his rehiring. St Andrews was then in very poor condition, and his first task was to correct this. He did so by widening the fairways, enlarging the greens, applying greenkeeping techniques he had developed at Prestwick, building two new greens (on holes 1 and 18), and “managing” the hazards. He stayed in the post until 1903, a total of 39 years, and was kept on afterward by the R & A at full salary.

Morris worked as a greenkeeper, clubmaker, ballmaker, golf instructor, and course designer, as well as playing match and tournament golf. He came second in the first Open Championship in 1860, and won the following year. He followed this up with further victories in 1862, 1864 and 1867. He still holds the record as the oldest winner of The Open Championship at 46. Also, he was part of the only father/son couple being winner and runner-up.

Morris held the record for the largest margin of victory in a major championship (14 strokes in the 1862 Open Championship), which stood until Tiger Woods won the 2000 US Open by 15 strokes. He became the second player to break 80 over the Old Course, scoring 79; Robertson had been the first to do it. Once his son Young Tom Morris became an accomplished player in his own right by his mid-teens, in the mid-1860s, father and son formed a team for challenge matches, usually played by alternate shot (foursomes play), where they proved very successful. Their partnership, although not exclusive, would continue until the death of Young Tom in 1875.

Morris played a role in designing courses across the British Isles. He began by assisting Robertson laid out ten holes at Carnoustie in 1842. His subsequent work included Kinghorn Golf Club in 1887, Kirkcaldy Golf Club Nov 1904 9- holes then May 1906 18 holes, Prestwick, Muirfield, Machrihanish, the Jubilee Course at St Andrews, Balcomie at Crail, Moray, Askernish in South Uist, Lahinch and Rosapenna in Ireland, Warkworth and Royal North Devon Golf Club (Westward Ho!) in England, King Edward Bay Golf Club in the Isle of Manand the Castletown Golf Club in the Isle of Man.

Morris was also the father of modern greenkeeping. He introduced the concept of top-dressing greens with sand, which significantly helped turf growth. He introduced many novel ideas on turf and course management, including actively managing hazards (in the past, bunkers and the like were largely left to their own devices, becoming truly “hazardous”) and yardage markers. He was the first to use a push mower to cut greens. He improved play at St Andrews by widening fairways to handle increased play, improving greens, and establishing separate teeing areas on each hole; all of these measures spread out play over larger areas, and led to better turf conditions. He created a new first green on the Old Course, and was responsible for the initial design of the New Course 1895 and Jubilee course in 1897. He also introduced the modern idea of placing hazards so that the golf ball could be routed around them; this was the beginning of strategic design, which has dominated golf course design ever since. Before his time hazards were thought of as obstacles that either had to be carried or were there to punish a wayward ball.

Morris kept working right up until his death, just before his 87th birthday. He died after falling down a flight of stairs in the clubhouse of the New Golf Club in St Andrews.

He is buried against the eastern wall of the churchyard of St Andrew’s Cathedral. The grave is simple but stands beneath the highly notable monument to his son, Young Tom Morris, which carries a bronze statue of the golfer in high relief against a white background, and is visible across the breadth of the churchyard. His grave attracts thousands of golfers each year who wish to pay homage to this golfing hero.

This Club is in good playable condition with the original Grip and underlisting with Wax coated thread use for the whipping then finished with Shellac to protect it from any bag damage that may occur. Please note: All our Clubs have been fully restored by a professional restorer of Hickory Golf Clubs.