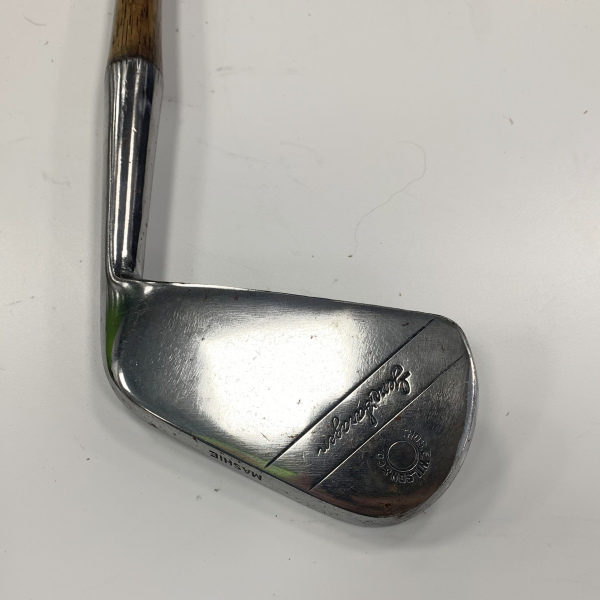 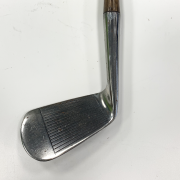 “This club has a Scored Line face pattern and marked Thos Wilson & Co Stamped Gene Sarazen, on the sole read MASHIE. Wilson Sporting Goods Company, Chicago and River Grove, Illinois.
The Wilson Sporting Goods Company dates back to 1914 when the Thomas E. Wilson Company was formed by the Ashland Manufacturing Co. of Chicago. Ashland was a large company involved in several meat packing and meat by-product ventures. The new Wilson Company grew quickly and soon became one of the largest sporting goods firms in the country. In 1923, they merged with the Western Sporting Goods Co. and the company name was changed to Wilson-Western Sporting Goods Co. They continued to offer a full line of athletic equipment and by 1931, the use of the Western name was discontinued in favour of the present name, the Wilson Sporting Goods Company. Throughout the 1940’s they acquired many small companies which produced sports related items such as uniforms and leather goods. As this expansion continued, they needed larger quarters and relocated to the Chicago suburb of River Grove.
Many of the companies which Wilson took over had some golf items, but it was not until 1944 that they purchased a major golf manufacturer. The L.A. Young Company, with their popular Walter Hagen line, became part of the Wilson empire. This division is now known as the Walter Hagen Company and continues to be operated at a separate facility in Grand Rapids, Michigan.
The Hagen Company had its start in 1922 when Hagen formed the Walter Hagen Golf Products Corporation in Longwood, Florida with two partners. Hagen had been using Spalding clubs since 1915 and had unsuccessfully tried to arrange a lucrative contract for his endorsement. Soon after commencing production, he found out that the humid Florida climate was not conducive to the golf club business. The hickory shafts which they were using would dry out and shrink when shipped to less humid regions of country. This resulted in loose club heads and numerous complaints, a problem which Hagen solved by selling out in 1925. The new owner was L.A. Young a wealthy man from Detroit, who was then the country’s largest manufacturer of automobile springs. Hagen continued on with the company as a club designer and was instrumental in the development of the wedge. Eventually the company moved to Grand Rapids, where it remains today.
Wilson’s aggressiveness in the business world was also evident in the marketing of their golf equipment. In 1925, they formed an Advisory Staff of professional golfers which would play a large part in their advertising. Their early Staff included many noteworthy players such as Gene Sarazen, Sam Snead, Ben Hogan, Walter Hagen, Lloyd Mangrum, Cary Middlecoff, Patty Berg and Babe Zaharias. In the modern era, Arnold Palmer, Billy Casper, Hale Irwin, Jerry Pate, Andy Bean and Tom Kite have continued the fine Wilson tradition. Wilson named several models after these players and even called their top line clubs the “Wilson Staff” model.
Wilson was one of the first makers to feature matched sets of clubs and have always offered a full line of clubs and accessories. Their most notable club feature has been the Strata-Bloc laminated wood club head which was introduced in 1941. Other club manufacturers were offering laminated heads during the 1940’s and 1950’s, but none promoted them like Wilson. While makers like MacGregor were focusing much of their design efforts on the appearance of their clubs, Wilson was concentrating on the mechanical aspects. In an effort to rearrange the club head weight, they designed a drilled through hosel which was first offered in their 1956 catalogue. The Wilson “fluid feel” hosel was a much refined version of the earlier Carruthers cleek developed in the 1890’s.
Until 1967, Wilson had always been a subsidiary of a large meat packing concern. In one if their rare instances of sharing the resources of the various divisions, they packaged tennis balls in a large can originally designed for lard. Generally, the divisions kept to themselves. Since the late 1960’s Wilson has been owned by several conglomerates, including PEPSICO, Inc. As always, they continue to be a dominant force in the realm of sporting goods This Club is in good playable condition with a new Grip and Whipped with waxed linen thread which has then been coated with shellac to protect it from any bag damage that may occur. Please note: All our Clubs have been fully restored by a professional restorer of Hickory Golf Clubs to playing condition. Your club/clubs will also be transported with proper Golf Club packaging. Please contact us about any shipping/postage enquiries. We can always make up a set of clubs of your choice. If you would like some more clubs after your first purchase please contact us though sales@hickorygolfsupplies.com”