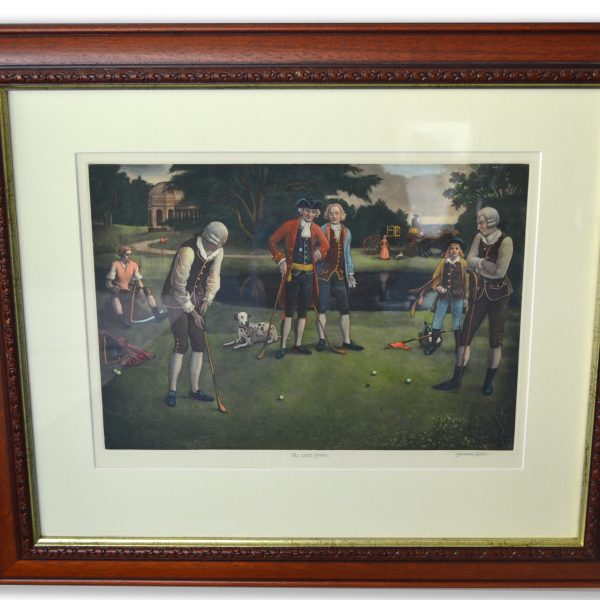 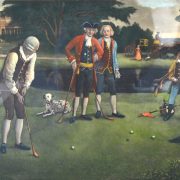 A print of Lawrence Josset, The Last Green golf, Dalmatian dog, A old England mezzotint. Lawrence Josset was in a sense a magnificent anachronism. Like his great 18th- and 19th-century predecessors, Valentine Green and Samuel Cousins for instance, he made his living as a reproductive mezzotint engraver. He, like his artistic forebears, used this most demanding of techniques to reproduce original paintings with astounding faithfulness; but, while the engravers of earlier times had no alternative, Josset furthered the great tradition of reproductive engraving in an age when the camera had all but eclipsed the craft.

A mezzotint engraver proceeds by patiently and systematically texturing the surface of a copper plate with a serrated device (Josset once told me it took him two weeks to prepare a plate of moderate size) and then scraping and polishing the textured surface to various degrees of smoothness in order to achieve the image. The plate is then inked by hand and printed in a rolling-press. Perhaps Josset’s most celebrated work is the mezzotint reproduction of Pietro Annigoni’s portrait of the Queen, published by the Times Publishing Company in 1957 and hand-printed in colour by the old-established firm Thomas Ross & Son. It is estimated that the plate was the result of six months’ labour and that the arduous process of inking and printing in colour meant that only two impressions could be made in a day.

Josset studied at Bromley School of Art and subsequently in the School of Engraving at the Royal College of Art, where he was taught by Robert Austin and Malcolm Osborne. He also worked for a year at Waterlow’s, the banknote engravers. After a brief spell of teaching, he embarked on what was to be a freelance career spanning more than 60 years.

Josset’s plates were commissioned by various prominent print-publishers, among them. Fores of Piccadilly and the Bristol-based Frost & Reed, but he found at Thomas Ross & Son, in the person of Alfred Pomeroy (who ran the firm until shortly before his death in 1962), someone he described as his “best connection”. Pomeroy’s sharp appreciation of Josset’s craftsmanship was matched by his realisation that the engraver was the most unworldly of men; when asked about his fee for making a plate he is reported to have replied: “Oh, pay me what you think is fair.” He told me ruefully a few months ago that his had been a hard life – many of his clients, he said, simply “forgot to pay”. Alfred Pomeroy seems to have done much to protect him by negotiating contracts on his behalf.

It is well known that reproductive engravers were loftily denied full membership of the Royal Academy for almost a century after its foundation in 1768 on the grounds that their work was merely imitative. Rather, it was (and is) an art of ingenious translation from the medium of paint to that of print, and a comparison of Josset’s prints with the original paintings – for example, Canaletto’s view of Eton College or Honthorst’s Christ Before the High Priest, both in the National Gallery – is as impressive a demonstration of this interpretive, empathetic skill as one will find anywhere in the history of art.

But Josset’s gifts were even richer: he made many hundreds of original drawings, mainly carefully observed pastoral scenes, architectural subjects and portraits, in a variety of media. This substantial body of work seems to have been undertaken by way of personal study and is largely unknown. Every piece is marked by the precision and patience that typify the engravings: qualities that were no doubt put to excellent use during Josset’s war service in the Army Camouflage Unit at Farnham Castle, where was devised every kind of visual deception that might confuse the enemy.

Josset spent the last 34 years of his life in the secluded Kent village of Detling, a setting entirely appropriate to his quiet, unassuming nature. He neither needed nor wanted an elaborate studio; all his wonderful engraved work was carried out at a small table in the living-room of the small cottage he shared with his wife and stepson. In a lean-to stood the monumental Victorian rolling-press on which he pulled countless proofs to check the progress of his work. He had no car; his journeys were made by motor-cycle or train, usually to Ross’s to deliver completed plates or to meetings and exhibitions of the Royal Society of Painter-Printmakers, of which he was a proud member. He was hard at work until a couple of years ago, when his sight began seriously to deteriorate. He was probably the last person to make a living, modest though it was, from an art that had by and large been extinguished a century ago by the arrival of photo-mechanical methods of pictorial reproduction.