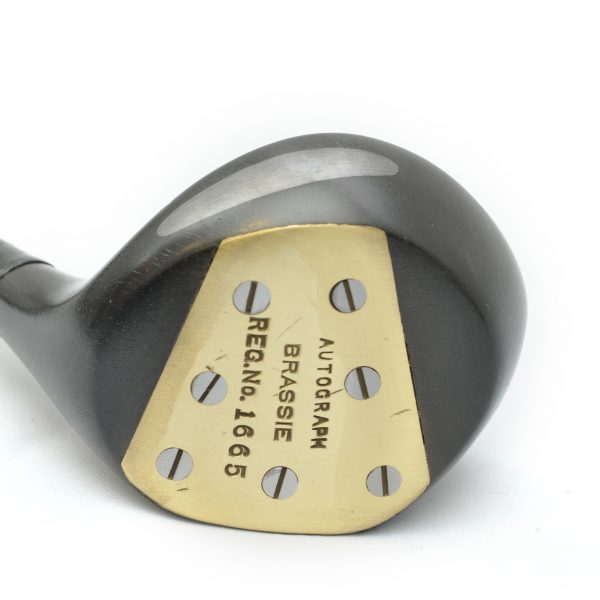 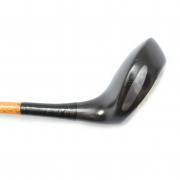 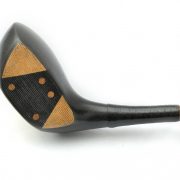 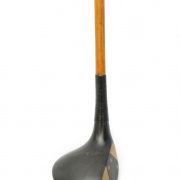 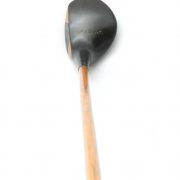 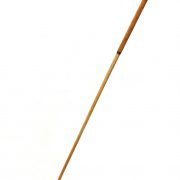 This wood has a fibre insert face is fitted with four wooden plugs,The head has been stained in charcoal grey, and has a lead back weight, the sole is fitted with a brass half plate is fixed with seven metal screws and stamped AUTOGRAPH BRASSIE REG.No.1665,The face lines have been re cut and on the top of the head is signed A.G.Spalding & Bros. Research tells us that Spalding existed for several decades in the United States before beginning to offer golf equipment in their line of sporting goods. Their interest in golf began in 1892 when Julian Curtiss was sent to Scotland to purchase leather for use in making footballs. According to the two versions of the story, Curtiss purchased five hundred dollars’ worth of golf equipment either due to his interest in the game or as a result of having had too much to drink at the tavern. The company was not very impressed with his acquisition since golf was not a common game, so he took the clubs to his home in Greenwich, Connecticut for storage. Shortly thereafter, Curtiss and his brother got some friends together to help lay out a five hole golf course so they could use the clubs and balls. Meanwhile, golf was gaining popularity in America and Spalding decided to recall the equipment and subsequently began to advertise golf items in their 1893 catalogue of sporting goods.
Spalding began making golf clubs in the United States in the mid 1890’s and in Britain shortly thereafter. One of the original manufacturing facilities was in Morristown, New Jersey and in 1898 they introduced the Morristown line of clubs to augment their earlier “The Spalding” line. Also about this time, Spalding designer James Cran patented the famous wood faced iron club popularly known as the Cran Cleek.

Spanning the hickory to steel shaft was Robert T. Jones autograph line of clubs which for a number of years were the finest balanced clubs available. Following his retirement from competition in the 1930’s, Jones became an advisor to the company. Spalding has continued to be a successful club manufacturer and had also greatly affected the golf ball business with the development and sale of their Top Flite brand.
Your club/clubs will also be transported with proper Golf Club packaging. Please contact contact us about any shipping/postage enquiries.