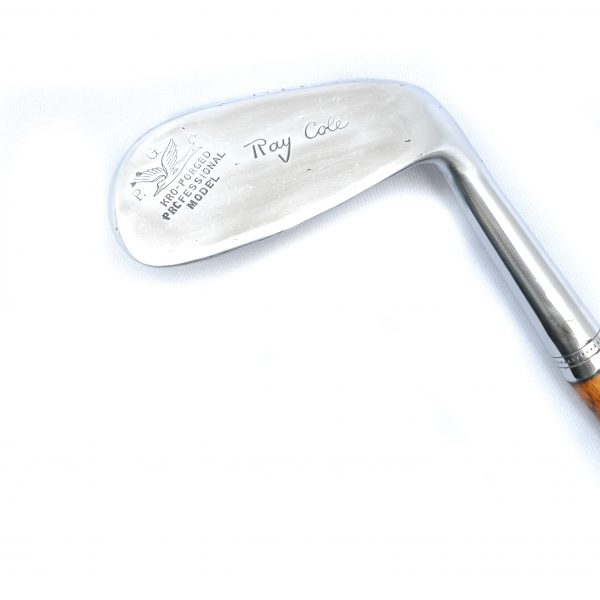 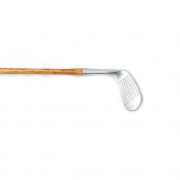 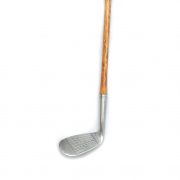 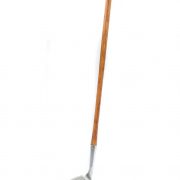 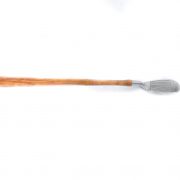 This club has a Deep Line and Hyphen combination pattern on the face and a nice line Dot pattern at the top of the hosel. It has the spalding “KRO” mark with P.G.A. around it with the words KRO-FORGED,PROFESSIONAL MODEL and signed Ray Cole. Research tells us that Spalding existed for several decades in the United States before beginning to offer golf equipment in their line of sporting goods. Their interest in golf began in 1892 when Julian Curtiss was sent to Scotland to purchase leather for use in making footballs. According to the two versions of the story, Curtiss purchased five hundred dollars’ worth of golf equipment either due to his interest in the game or as a result of having had too much to drink at the tavern. The company was not very impressed with his acquisition since golf was not a common game, so he took the clubs to his home in Greenwich, Connecticut for storage. Shortly thereafter, Curtiss and his brother got some friends together to help lay out a five hole golf course so they could use the clubs and balls. Meanwhile, golf was gaining popularity in America and Spalding decided to recall the equipment and subsequently began to advertise golf items in their 1893 catalogue of sporting goods.
Spalding began making golf clubs in the United States in the mid 1890’s and in Britain shortly thereafter. One of the original manufacturing facilities was in Morristown, New Jersey and in 1898 they introduced the Morristown line of clubs to augment their earlier “The Spalding” line. Also about this time, Spalding designer James Cran patented the famous wood faced iron club popularly known as the Cran Cleek.
In 1898, Spalding signed a contract with Harry Vardon, the British Open Champion, for the purpose of endorsing a Spalding gutta percha golf ball which they called the Vardon Flyer. In doing so, Vardon became the first professional athlete to receive money for promoting a product. He won the 1900 U.S. Open with this ball and then conducted an exhibition tour of the United States to promote the Vardon Autograph model clubs and the Vardon Flyer balls. Spalding’s timing of this promotion was too late since the rubber wound ball was rapidly gaining in popularity and the Vardon Flyer was discontinued shortly thereafter.
In 1904, Spalding won a gold medal for their display of sporting goods at the Louisiana Purchase Exposition. To celebrate this award, they introduced their Gold Medal line in 1905 and continued to make these models until 1919. They were also having great success with the Wizard golf ball and their versions of the dimpled ball which was introduce in 1909.
Spalding continued to be a major manufacturer of golf clubs and balls. The most successful of their clubs were the Kro-Flite matched woods and irons, of which millions were produced. They were introduced in the late 1920’s along with the popular Thistle, Symetric, Dundee and Firebrand lines of clubs.
Spanning the hickory to steel shaft was Robert T. Jones autograph line of clubs which for a number of years were the finest balanced clubs available. Following his retirement from competition in the 1930’s, Jones became an advisor to the company. Spalding has continued to be a successful club manufacturer and had also greatly affected the golf ball business with the development and sale of their Top Flite brand.  This Club is in good playable condition with a new Grip and Wax coated thread use for the whipping then finished with Acrylic to protect it from any bag damage that may occur. Please note: All our Clubs have been fully restored by a professional restorer of Hickory Golf Clubs; it/they will arrive with a Tarnish Guard to protect it from the damp air which will allow it to rust, and should be replaced after cleaning.