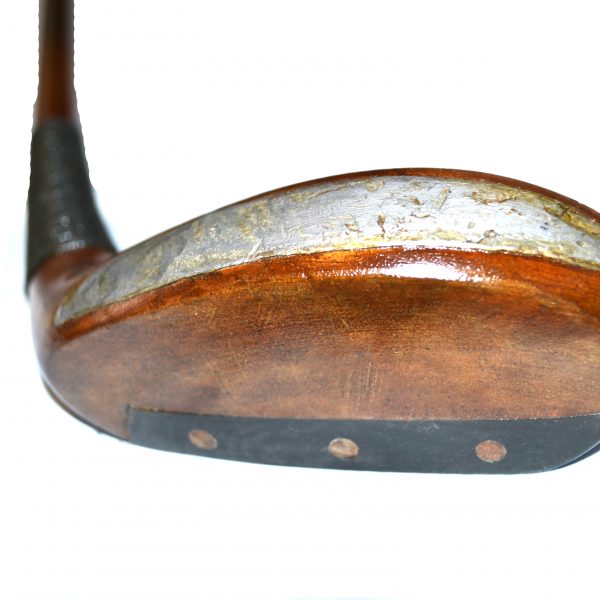 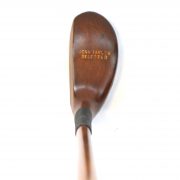 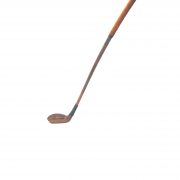 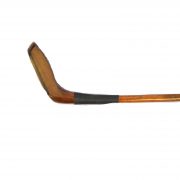 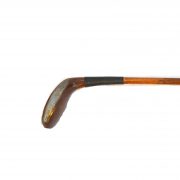 This club has a scored line face pattern, finished in a Rosewood stain, across the crown is wrote Josh Taylor Selected, fine scare neck wooden mallet head Putter with black fibre sole strip held in position with three wooden pegs and a large back weight which is firmly in position, the St Andrews bend shaft shows the maker’s stamp below the full length period hide grip. Research tells us that Josh Taylor was the younger brother of J H Taylor. Born in Northam in 1880, he played golf from early childhood onwards. In time he was apprenticed to Cann and Taylor, his brother’s clubmaking firm.

His first position as a professional was at Aldeburgh and came after service in the Boer War. Clubs were made for him by Cann and Taylor and in the 1920s they produced his own model with the mark of a greyhound. He served as professional to several London clubs including Acton, Richmond Municipal and Sudbury. He represented England (against Scotland) in 1913 and played in the pre-Ryder Cup international match against the USA at Gleneagles in 1921.

In clubmaking he received a patent for what might be termed a “bramble” club in 1912. Golf balls of the period had either concavities, “dimples”, or convexities “brambles”, so Taylor proposed a striking face for iron clubs with hemispherical or conical protuberances rather than indentations.

He also found time to write The Art of Golf, first published in 1913. This Club is in good playable condition with a original Grip and Wax coated thread use for the whipping then finished with Shellac to protect it from any bag damage that may occur. Please note: All our Clubs have been fully restored by a professional restorer of Hickory Golf Clubs.