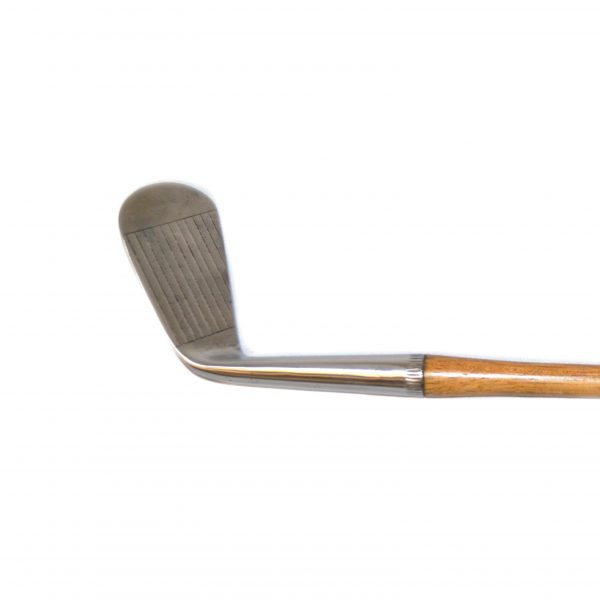 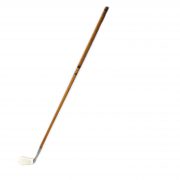 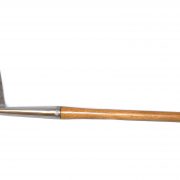 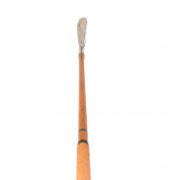 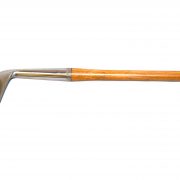 This club has a Scored Line face pattern with the trade mark of Hillerich & Bradsby.Co. Louisville.KY.  also stamped Lo SKORF and a Golfer smoking a pipe, 5H MASHIE stamped on the sole. Research tells us that J. F. Hillerich opened his woodworking shop in Louisville in 1855. During the 1880s, Hillerich hired his seventeen-year-old son, John “Bud” Hillerich. Legend has it that Bud, who played baseball himself, slipped away from work one afternoon in 1884 to watch Louisville’s major league team, the Louisville Eclipse. The team’s star, Pete “The Gladiator” Browning, mired in a hitting slump, broke his bat.

Bud invited Browning to his father’s shop to hand-craft him a new bat to his own specifications. Browning accepted the offer, and got three hits to immediately break out of his slump with his new bat the first day he used it. Browning told his teammates, which began a surge of professional ball players to the Hillerich woodworking shop.

J. F. Hillerich was uninterested in making bats; he saw the company future in stair railings, porch columns and swinging butter churns. In fact, for a brief time in the 1880s, he even turned away ball players. Bud, however, saw the potential in producing baseball bats, and the elder Hillerich eventually relented to his son.

The bats were sold under the name “Falls City Slugger” until Bud Hillerich took over his father’s company in 1894, and the name “Louisville Slugger” was registered with the U.S. Patent Office. In 1905, Honus Wagner signed a deal with the company, becoming the first baseball player to officially endorse a bat.

Frank Bradsby, a salesman, became a partner in 1916, and the company’s name changed to Hillerich and Bradsby. By 1923, H&B was selling more bats than any other bat maker in the country, and legends like Ty Cobb, Babe Ruth and Lou Gehrig were all using them.

During World War II, the company produced wooden rifle stocks and billy clubs for the U.S. Army. In 1954, the company purchased Larimer and Norton, Inc., a Pennsylvania lumber company to ensure a supply of hardwood for their products.

In 1976, the company moved across the Ohio River, to Jeffersonville, Indiana, to take advantage of the railroad line there. In the 1990s, the company returned to Louisville, Kentucky. They have the “Largest Bat in the World” outside the Louisville Slugger Museum & Factory. This Club is in good playable condition with a new Grip and Wax coated thread use for the whipping then finished with Shellac to protect it from any bag damage that may occur. Please note: All our Clubs have been fully restored by a professional restorer of Hickory Golf Clubs; it/they may arrive with a Tarnish Guard to protect it from the damp air which will allow it to rust, and should be replaced after cleaning.