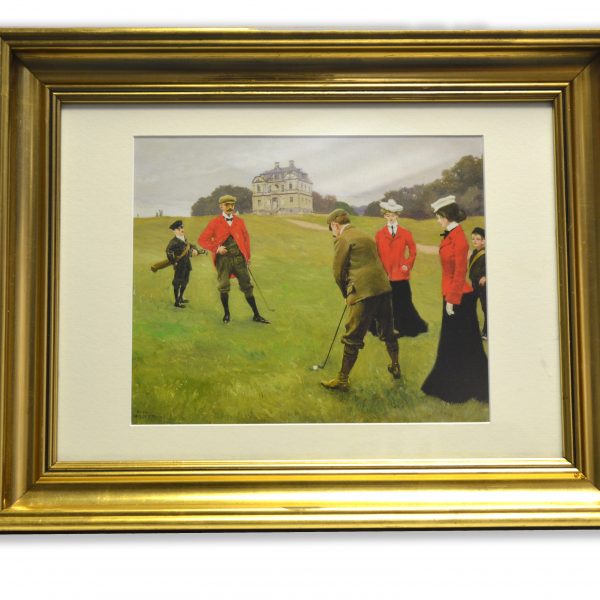 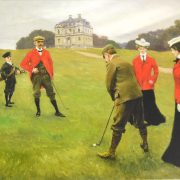 A print of Paul Gustave Fischer Golf Players at Copenhagen Golf Club 1860 Paul Fischer belongs to the fourth generation of Fischers to live in Denmark. This Jewish family originally came from Poland. The family was upper middle class; Paul’s father had started as a painter, but later succeeded in the business of manufacturing paints and lacquers.

His formal art education lasted only a short time in his mid teens when he spent two years at the Royal Danish Academy of Art in Copenhagen.

Fischer began to paint when he was still young, guided by his father. It was thanks to a painting he had published in Ude og Hjemme that his reputation began to evolve as he came in contact with young Danish naturalists. His earlier paintings depict city life. For this reason, he has been called “Copenhagen’s painter” or “Københavns maler”. After a stay in Paris from 1891–1895, his colours became richer and lighter. It was not long before Fischer gained fame as a painter of cities, not just Copenhagen, but scenes from Scandinavia, Italy and Germany, reaching his zenith between 1890 and 1910. He benefited from contemporaries in Norway and Sweden, especially Carl Larsson. Around this time, he also painted bright, sunny bathing scenes, some with nude women, and developed an interest in posters, inspired by Théophile Steinlen and Henri de Toulouse-Lautrec.

During the period when he actively painted, Danish art was dominated by Laurits Tuxen. Despite Fischer’s lack of critical recognition during his lifetime, his art sold well. One major event in which he succeeded over Tuxen was when Sweden transferred the sovereignty of Norway back to the Norwegians – Fischer rather than Tuxen got the commission from the King of Norway to paint the event.