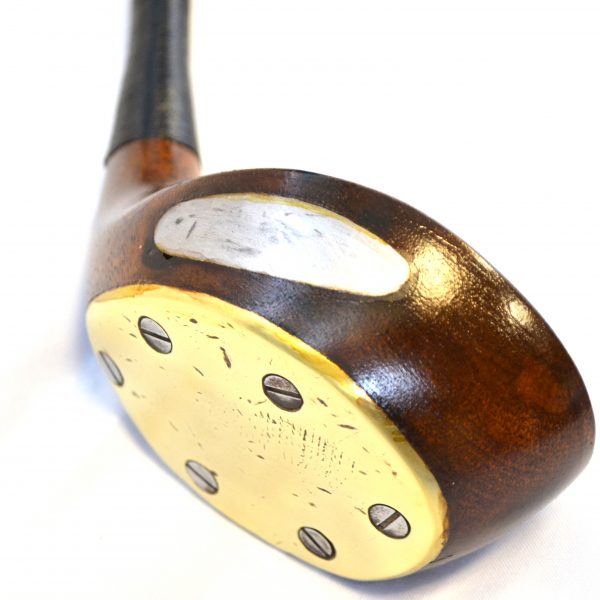 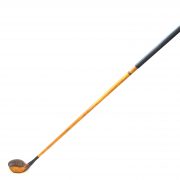 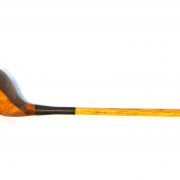 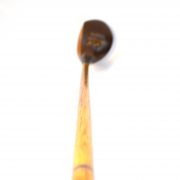 This club is a socket head and has been finished in a Rosewood Stain, across the crown is Signed Co. Nelson and Stamped Cann & Taylor with J.H.Taylors name is Autograph Script with Registered design Number 303956. with a Full Brass Wrap around sole plate which is fixed with 6 Steel screws, the Lead back weight is securely in position, the face lines have been re-cut and has a Fibre insert at the leading edge.  Research tells us John Henry Taylor ( 1871-1963 ) known as ‘Wig’ as a boy on account of the colour of his hair but today, always referred to as ‘JH’, was born into a very poor family ( ‘once you’ve felt the cold chill of poverty it is something you never forget’ ) thirty six years into the reign of Queen Victoria.  His father was a labourer who took what work he could get in an era when no work meant no pay. His mother took in washing and occasionally, as a last resort, accepted “parish pay“, a donation from her local church.  Before he died in his early 90s, JH became the Champion Golfer five times, designed golf courses and clubs, travelled to Europe and America, played golf and dined with Kings, Prime Ministers and assorted aristocracy but always stayed true to himself, his family and his reputation as ‘the peoples champion’; somehow finding the time to help establish The Artisans Golfing Association, The Professional Golfers Association and encourage local councils to open up public golf courses for the working man. He also captained a winning Ryder Cup team!

Taylor’s Gold is a well assembled book of short but fascinating chapters, wonderfully illustrated with a lot of, previously unseen by many, photographs of JH and some of the interesting people that he associated with on his journey from ‘odd boy’, ‘boot boy’ and ‘caddie’ to becoming one of Clement Flower’s ‘The Great Triumvirate’ and, in his retirement,  President of Royal North Devon Golf Club, into whose clubhouse he would not have been invited as a young man. Many of the words are his own as he was an accomplished writer, but there are major contributions from his daughter Phyllis and his four grand children, as well as his golf colleagues. Bernard Darwin wrote of JH ‘he was a natural speaker, a natural fighter and a natural leader. He would have made his mark in any walk of life’. He chose golf, or did it choose him? either way his life was an awe inspiring journey of the best kind, and well worth reading. This Club is in good playable condition with the original Grip and Wax coated thread use for the whipping then finished with Shellac to protect it from any bag damage that may occur. Please note: All our Clubs have been fully restored by a professional restorer of Hickory Golf Clubs;