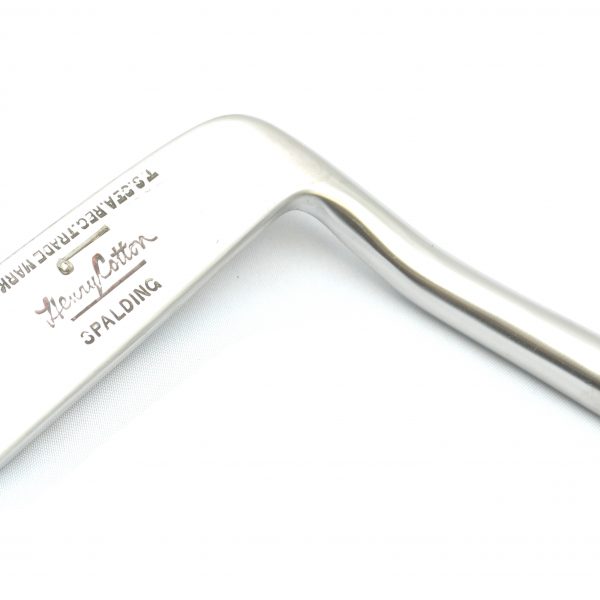 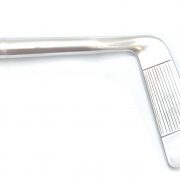 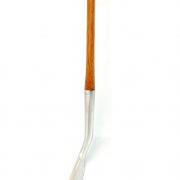 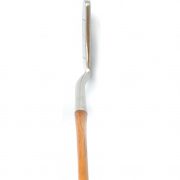 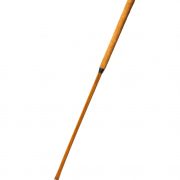 This club has a Scored line pattern on the face marked with the Tom Stewart “pipe” and T.S.STA. REG. Trade mark and signed Henry Cotton. Research tells us that Tom Stewart Jr. opened his cleekworks in Argyle Street St Andrews in 1893. He learned his trade as a blacksmith with his father in Carnoustie, where “cleeks” were sometimes made. (George Morris, older brother of Tom was a client of renown.)

Tom Stewaert of St Andrews, Jr (1861-1931) learned clubmaking from his father and also from Robert White. Their firm is one of the better known of the early clubmakers and their output of clubs over the years reached into the millions. His earleist mark was the “pipe” to which was added in 1905, the phrase “T.S.St. A. REG. TRADEMARK.” Stewart also used the “serpent” mark to designate ladies or juvenile clubs between 1895 and 1905.There was a style and substance about Sir Henry Cotton that made him not only unique, but a British national hero. He was much more than just a three-time British Open champion. He also championed the cause of British golf professionals seeking a higher ground in their country’s society and became a patriarch of the European Golf Tour. Described as witty, handsome, intelligent, urbane and a non-conformist, Cotton authored 10 books, designed golf courses and was the most respected and prolific British instructor of his era. His philosophy was simple: “To be a champion, you must act like one.”

Cotton was born Jan. 26, 1907, at Holmes Chapel in Cheshire, England. He left private school at age 16 in a dispute with his cricket coach and set out to learn the trade of golf on his own terms. This meant dressing smartly but shunning the traditional jacket and tie, and behaving properly, but never subserviently. Encouraged by Harry Vardon, James Braid and J.H. Taylor, Cotton took his first head professional job three years later, but soon moved to the Waterloo Club in Brussels, where he was treated as an equal.

Cotton’s devotion to practice was almost maniacal for he believed the only secrets to becoming a champion golfer were hard work and strong hands. For hours upon hours, Cotton was known to hit balls from thick rough until his hands blistered and bled. It was an obsession that paid off in the 1934 Open at Royal St. George’s. With opening rounds of 67-65–132, Cotton set two scoring records and opened a lead that was insurmountable. Even with a 79 in the final round, Cotton was able to win by five strokes and end a run of overseas victors that had lasted since Arthur Havers’ triumph in 1923.

Cotton’s second Open Championship triumph came three years later at Carnoustie, where his final round of 71, shot in a downpour, was considered every bit as good as his record 65. That gave Cotton a two-stroke victory against a field that included every member of a United States Ryder Cup team captained by Walter Hagen which included Gene Sarazen, Byron Nelson, Sam Snead, Ralph Guldahl, Denny Shute and Henry Picard.

Sir Henry Cotton is considered the first British player who put himself through a rigorous practice schedule.

In addition to those popular victories, Cotton also won three British Match Play Championships and 11 national championships on the continent of Europe. He played for his country in three Ryder Cup matches and twice captained the British team, but most of his time after the 1948 Open Championship at Muirfield was dedicated to instruction, designing golf courses and giving back to the game that had given so much to him.

Whether it was giving no-cost instruction to junior golfers through the Golf Foundation, or doing exhibitions to raise money for the Red Cross, Henry Cotton was as hard-working and devoted as he had been about learning how to swing a golf club. For this, he was honored with a Knighthood, and on New Year’s Day of 1988, just one week after his death, Henry Cotton MBE officially became Sir Henry Cotton, Knight Commander of the Most Honourable Order of St. Michael and St. George.

It was his third Open Championship at Muirfield in 1948 that completed Cotton’s transformation from the anti-establishment rebel to a national sporting legend and celebrity. Now 41 and robbed of his prime by World War II, Cotton shot a course-record 66 in the second round that was witnessed by King George VI. It was the only time a reigning monarch had been present at the Open.
This Club is in good playable condition with a new Grip and Wax coated thread use for the whipping then finished with shellac to protect it from any bag damage that may occur. Please note: All our Clubs have been fully restored by a professional restorer of Hickory Golf Clubs; it/they will arrive with a Tarnish Guard to protect it from the damp air which will allow it to rust, and should be replaced after cleaning.